The third and final volume of The Violet Trilogy -- Imagine Violet Blooming -- is off to the press today. Thanks to Mark Hand, once again, for creating this lovely cover. The book will be available for sale shortly after Canadian Thanksgiving (October 12) 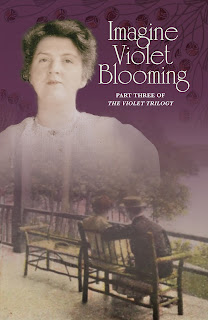 Robbie Cheadle, a writing colleague I "met" through Goodreads commented recently on how interesting it was to read about how pregnant ladies had to behave in late Victorian times. She was reviewing "Imagining Violet Married".

There were very strict societal rules at that time and ladies simply did not appear in public in 1899 after the second trimester. It started me thinking about how things had changed -- or hadn't -- by the more liberal 1960s.

In 1968, I was working at a large private TV station in Toronto as a program organizer on a game show. The women in the next office were producing an afternoon talk show, the "Carole Taylor Show". And yes, that's the same Carole Taylor who later in life was BC's Minister of Finance. Carole's program organizer was pregnant, and at about her 7th month, she was told in no uncertain terms that she should no longer come to work. To her utter astonishment, she was told that the presence of a visibly pregnant woman was not acceptable in a TV studio. We were shocked and furious.

Two years later I had another TV gig as production assistant on a debate show called "Under Attack". My producer, the late John Kastner, was more open-minded and when I became visibly pregnant there were no repercussions. My first baby was due 3 weeks after our production ended so I didn't foresee a problem. Our last taping session was in Ottawa on Wednesday the 25th of February and our guest was Pierre Elliott Trudeau! I had to get permission from my doctor to fly to Ottawa that week, but otherwise, no problem. Trudeaumania was in full force and it was exciting to meet the man close up, albeit shrouded as I was in a tent-like dress. We pregnant ladies were still making some effort to hide our bulk. We taped the show on Wednesday night and flew back to Toronto on Thursday morning. Friday was to be our last day, our post-production clean-up day.

But I didn't make it. Overnight Thursday night I had cramps, then severe cramps. Thinking it was false labour I phoned the office around 8.30 and said I'd be late for work. But I never did get to the office that day and was lucky to get to the hospital in time. My first born arrived at 11:02 Friday morning.

A message from Paul Hahn's granddaughter

Paul Hahn was a distinguished 'cellist and a good friend of Violet and Frank Welsman's. His granddaughter Alex Hahn, sent me this kind note this morning. Paul Hahn established his piano company in 1913, the company that Alex Hahn now owns and operates.

I got a chance to read the book this weekend.  I was up at our family cottage on Lake Temagami, the perfect surrounding to appreciate the story you told.
What a treat, I feel like I was back in time… I think I mentioned I never got to meet my grandfather, and really know very little about him.  My imagination has gone wild thinking about his friendships and the contributions all those musicians made at the turn of the last century.
Trying to imagine the amount to research you put into this book. Congratulations! I will pass the book onto my sisters, as I know they will get a kick out of reading it.  What will book three be called?
Take care,
Alex
Alex Hahn | Owner/ Operator | Paul Hahn & Co. | 1058 Yonge St | Toronto, ON M4W 2L4 | 416.922.3122 x224 | paulhahn.com
https://www.facebook.com/PaulHahnAndCompany/https://www.instagram.com/paulhahnpianoshttps://twitter.com/paulhahnpianos
Posted by mary hughes at 14:59 No comments:

I am pleased to announce the publication of the Kindle edition of Imagining Violet Married (Part Two of The Violet Trilogy). It's available at Amazon.ca for $3.99 as well as Amazon.com and Amazon.co.uk.

Imagining Violet Married continues Violet's story as she and her new husband, Frank Welsman, embark on married life at the turn of the 20th century. Like Part One, the story begins with a journey, their voyage from Liverpool to Canada. Then Violet writes to friends and family about the challenges of living with her in-laws, her first pregnancy and the growth of Frank's career as a concert pianist. During these years, the family spends summers on an island in Muskoka. It's gentle domestic drama with elements of social history within the context of Toronto's development as a musical centre in North America.

One reviewer, wrote that "the author has succeeded in creating a wonderful glimpse into the world of polite society in turn-of-the-century Toronto. If you're the type of reader who enjoys history and likes to be immersed in the past, this may be the book for you. The story is drama-free and does not follow the typical conflict/resolution format."

Written as a series of letters to friends and family, the book is also available as a paperback for $20 plus $5 postage from Amazon or from the author's website: https://imaginingviolet.blogspot.com

First off, this is not a book for everyone. So why the five-star rating? Because I believe the author has succeeded in creating a wonderful glimpse into the world of polite society in turn-of-the-century Toronto. If you’re the type of reader who enjoys history and likes to be immersed in the past, this may be the book for you. The story is drama-free and does not follow the typical conflict/resolution format. Instead, it’s written as a collection of letters penned by Violet, a young wife who goes about setting up her new life in a country that is foreign to her.Some of the events she writes about may seem ordinary at first glance (buying a new house, her husband’s budding career, building a vacation home, having children), but it’s a credit to the writer that the book still held my interest to the end. Violet is a well-rounded and carefully thought out character - her letters excel at taking everyday events and making them memorable. This would be an ideal book to read over the course of a relaxing weekend.

Thomas O
Posted by mary hughes at 12:04 No comments:

My very first book,published 2006,  was "Frank Welsman, Canadian Conductor", which was a revisionist approach to the history of the  Toronto Symphony Orchestra. As a result of my research for The Violet Trilogy, I have made some changes to "Frank Welsman" and I have converted it into an e-book, now available at Amazon.com. Click on the link for more: 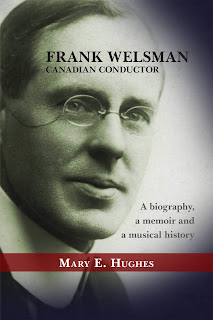 I am very pleased to announce that the venerable music store, Remenyi House of Music , at 210 Bloor Street West, Toronto, is carrying both of my Violet books, Imagining Violet and Imagining Violet Married. Save the cost of shipping, and check out the Remenyi House of Music. Of course they are still available via Amazon or directly from the order form on this site.
Posted by mary hughes at 14:44 No comments: 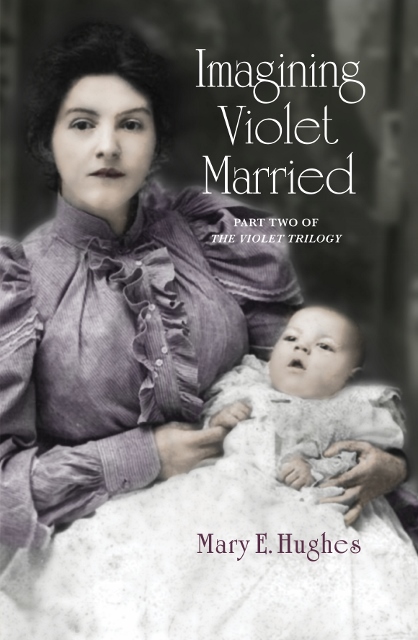